davidre added a comment to T12063: KGlobalAccel cleanup and improvement for desktop files.

As a prototype I made kglobalaccel use dbus activation (https://specifications.freedesktop.org/desktop-entry-spec/desktop-entry-spec-latest.html#dbus) if the desktop file specifies it is dbus activatable instead of manually parsing Exec fields. Also a patch for spectacle to see how it would work.
https://invent.kde.org/frameworks/kglobalaccel/commit/78baef0af7ec56db115f9e2c726a714a8684761b
https://invent.kde.org/graphics/spectacle/commit/a43c16d395ef5c0f0373ccfa555db783052b6797

davidre added a comment to T13442: Tweak the design of context menus.

I was asking not in a navigational sense but more in a content organizing way. Single Page (current Kirigami.AboutPage) vs. multiple pages/tabs (KAboutDialog)

Do we need tabs? Kirigami.AboutPage can get away with no tabs and the current KAboutDialog is sometimes very small...
The only thing is that old apps sometimes can have very long developer lists, but I would very much love to help with implementation aligning the widgets and Kirigami dialogs (maybe also KAboutPluginDialog?) when it's ready

So once you have a single property you are safe and free to add new properties abi wise no matter the compiler?

Is Krunner the only place where it works or are there other places?

davidre added a comment to T7293: Web shortcuts (also to be rethinked?).

It should be in the Seach category imo and not shortcuts. It has nothing to do with keyboard shortcuts.

Do we need Main and alternative which are basically just the same thing twice? There will be of course people who make use of it in their workflow

For me it was sometimes faster, sometimes slower without a pattern that I could spot

In my testing dragging a window to a screen with a different scalefactor has no issue and @apol said for him it's better than the status quo. So I would like to land this

Ping. Did you have time to look into

I noticed a flaw however in the current code if the first instance of spectacle is started with --new-instance a second one will always be started when the shortcut is pressed regardless of the setting.

Alright I guess. Should we maybe even hide it from the user visible options then?

davidre added a comment to D29487: Refactor Spectacle to run in single instance mode with KDBusService::Unique.

Ping. Did you have time to look into

I noticed a flaw however in the current code if the first instance of spectacle is started with --new-instance a second one will always be started when the shortcut is pressed regardless of the setting.

I assume that you mean:

@davidre One other thing I noticed: launch Spectacle with any shortcut (except 'Print' key standalone), for example Shift+Print. Spectacle saves the picture instantaneously but no window of Spectacle opens up, only a notification shows up. Is this also "works as designed" or do/should we change some behavior regarding this one?

I don't think we want to require in source builds

For the leaks, I really have no idea. (also asked some friends but no help) C++ isn't my primary programming language. If you can share some document/tutorials/examples...

In C++ there is automatic and dynamic storage duration (and some others but you don't need to care about them for now). Automatic is the normal when you write

I don't get how saving as a png fails if we have the image as QImage.

I wonder if this could be integrated into the new Global Shortcuts KCM (after renaming it to just "Shortcuts"). We could add a new category called "Common shortcuts" under the Applications section. What do you think, @davidre?

I think it could work. I'm not sure if it should be under Applications. I think it could be missed there. I would introduce a new section called "Common Shortcuts" or "Standard Shortcuts". Then I would like to categorize all current KStandardShortcuts (either in the kcm or on frameworks side) to have multiple things in the category like Editing or Navigation for Example. This would also make it easier to find specific shortcuts.

May 14 2020, 8:13 AM · Plasma: KCM Redesign
davidre added a comment to D29487: Refactor Spectacle to run in single instance mode with KDBusService::Unique.

I didn't review the entire code yet but seems much cleaner. A very welcome refactor!
I noticed a flaw however in the current code if the first instance of spectacle is started with --new-instance a second one will always be started when the shortcut is pressed regardless of the setting.

I fail to see what the kded module actually does. Or is it the case that simply requesting the data from the engine causes it to cache the image on disk? Maybe that should be documented.

do it for all

Do it for every scrollview

Should this go to master, too? Or should we hope that we need the workaround only for 5.18 and 5.19 and the qtbug will be fixed eventually?

My idea would be:

You can select one or both but not none. (Can we do that in a self explanatory way)?
Probably in general settings? And then we could add another checkbox [] Also do that when Spectacle is running

Ah I see, the select button will change the pixmap what is saved/copied but not the displayed one?

I would like to keep the option. We currently just start a new `Qprocess with "spectacle" would that still work?

Why do we introduce the distinction between delayed and immediate? Is there a difference between delayed with 0 seconds and immediate? Also every screenshot triggered by the gui arrives at spectacle core with delay <= 0 because ksmainwindow waits the delay for the taskmanager animation and animating the button.

I had a similar idea to have a setting that controls what happens on shortcut press and when gui is running because currently the ui does not work for this. What we have is

Very cool! However I can't seem to figure out a way to select a selection.
How do you think does this relate to D22074? Maybe we can integrate both patches somehow? 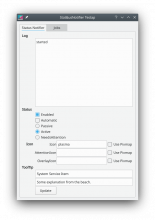 davidre added a comment to D29487: Refactor Spectacle to run in single instance mode with KDBusService::Unique.

Just a heads up you don't need to use the weird lvariable, theParam code style. See discussion in https://phabricator.kde.org/D21042

Why go through QStyle then? We have much more Plasma themes and plasma theme can also be used a quick controls style. The only problem is that in Plasma we want to have two different styles in the same process which is currently not possible. Kai had the idea of a proxy quick controls style which would select the approbiate style plasma or org.kde.desktop depending on if something is part of the shell or not (like the config windows) but that needs investigation if that is possible/feasible.