Come up with a solution for displaying QQC2 elements in Plasma
Open, NormalPublic
Actions

When you use a QQC2 or Kirigami element in Plasma, it gets the desktop style.

This is desirable if the thing you used it in is a dialog window, because it makes the dialog window look native.

If the thing you used it in is a Plasma popup/widget/panel/whatever, then it gets the desktop style which makes it look wrong. It can even cause bugs when, for example, you use a dark plasma theme and a light apps theme, because the QQC2 element will respect the colors from the color scheme, not the colors from the Plasma theme. You end up with something like this: 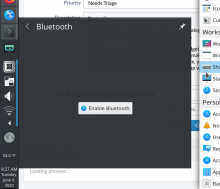 At this point you're probably be tempted to say, "Duh, don't use Kirigami or QQC2 elements in Plasma, use the PlasmaComponents/PlasmaExtras version."

But this presents a problem: we're stuck maintaining a second toolkit, forever, which increases the maintenance burden and amount of buggyness throughout our software. And if something nice gets added to Kirigami (such as PlaceholderMessage, from the above image), you can't use it in Plasma unless you create a PlasmaExtras version, which again doubles your maintenance burden for that item and introduces a new issue that they can drift out of sync with one another over time. This is constantly happening with PlasmaComponents2, PlasmaComponents3, and QQC2 stuff, and it's really annoying.

I think it would be good if we could come up with a way for QQC2 and Kirigami controls to use the Plasma style when displayed in a non-windowed Plasma UI (e.g. a widget, panel pop-up, etc). If we did this, we would have a path forward for sunsetting PlasmaComponents, or turning it into a simple style bridge with no logic in it.

Related to but necessarily a duplicate of T11558: kill plasma components in favour of qqc2-desktop-style. If we do T11558, we won't have to do this, but we can do this without having to do T11558.

feasible technical solutions at the moment are

I wouldn't be in favor of making config windows have the plasma style. In other respect they would match the desktop style (e.g. titlebar) so that would just be weird IMO.

One idea I've been throwing around recently is using the Plasma theme for apps too, by making the QStyle load Plasma theme SVGs. This would eliminate the potential problem of Plasma dialogs having a different appearance from apps, because all of them would be using the same theme in the first place. It would also allow a single theme to apply to the entire system, producing a major consistency win, and these newly-all-encompassing systemwide Plasma themes are share-able via GHNS, which is not currently possible using binary QStyle widgets themes. In so doing, the Breeze QStyle would be essentially transformed into a theme engine. Alternatively I suppose we would fork it into a new one, or write a new one.

If we did this, then we could port all of Plasma to use QQC2 rather than PlasmaComponents3 and load the Plasma style using qqc2-desktop-style or some other method, eventually winding up with only two UI libraries to maintain (QWidgets and QQC2+Kirigami, with no PC2 and PC3) and only one UI style to maintain (the Plasma style).

Well Qstyle is had to make thus stuff like kvantumn. So this will help quite a bit