IlyaBizyaev added a comment to T13386: The KDE Network Program.

I agree with Carl here. The proposed program document is very detailed on requirements that volunteers have to fulfill to comply, which adds extra bureaucratic burden and increases the entry barrier, but is scarce on rewards. Personally, I do not see the benefit of getting the Russian community enrolled in this program. Event swag? I'm confident the e.V. would reimburse it for an otherwise organized local event, too. Certificates? Not sure if those have any value. It could be my time limit speaking, though.

Will do, but I think it's not really resolved if it crashes unless that file is translated...

Currently localization doesn't work at all for this subsection, failing with a server error.
https://kde.org/applications/ru/education/org.kde.gcompris

IlyaBizyaev updated the task description for T10034: Attract existing FLOSS software projects to KDE and incorporate their members into our community.
Jun 20 2020, 8:28 AM · KDE Promo

IlyaBizyaev added a comment to T10597: Branding for Plasma Nano.

Seems to be agreed on, yet stalled

IlyaBizyaev added a comment to T13075: Move all things in Plasma to PC3, and then to QQC2.

How will that approach handle visual differences between application controls and Plasma controls?
An example is Kubuntu's default theme combo, which I also use on my machine: Breeze (default, light) for apps and Breeze Dark for Plasma. Light apps and a visually distinct dark panel are not an esoteric combo, some other workspaces default to it, e.g.:

On GNOME, while maintaining a separate look, the shell style is part of the GTK theme IIRC, but Is it possible to combine two distinct control looks in terms of a single QQC2 style? Especially when our style is, in fact, a bridge from QWidgets style, which is hardly something we can expect 3rd-party developers (except Kvantum) to work on?
May 3 2020, 8:12 AM · Goal: Consistency, VDG, Plasma

When I updated my parents' PC, they lost the TeamViewer desktop icon because it became monochrome.
Confirmed locally, the TeamViewer icon in the Dashboard menu is also monochrome.
This does not happen to the recently introduced Flameshot icon, so what's the difference here?

IlyaBizyaev added a comment to D28989: [applets/notifications] Widen pop-up and reduce spacing when on top or bottom center.

On the screenshots, the notifications block tab bars and toolbars in 3 apps :)
Are you sure it's more convenient?

As an idea, the most common request has been to provide an up-to-date and regularly updated ISO for x86_64. As of now, that image is still from 02.2019.

I don't have enough CMake knowledge to give code comments, but here are some things I can notice in case they help in review:

Thank you for your work :)

CMake needs to know what files Cargo wants to build in order to invoke it only when Rust files change. There's no reason to invoke Cargo every time make is ran when CMake has the ability to keep track of dirty files.

more than half of Ikona's CMakeLists.txt is boilerplate dedicated to integrating Rust with the rest of the project

I'm not good at CMake modules, but maybe this code (which I used in a project) is useful:
https://github.com/Devolutions/CMakeRust

It seems that of released distros, only Fedora has vokoscreenNG in repositories so far

If it doesn't for you please file a bug so we can investigate that.

Btw that overlay is always as tiny as on your screenshot, so not usable for a counter

So... how do we fix this so that you can use a nice monochrome Breeze icon in your system tray? Whose code needs to change?

This breaks for people using Breeze for apps and Breeze Dark for Plasma:

This is not a solution; we need to make sure things work by default and not in terminal-hackish way. So for a novice user with default Kubuntu settings and an official Telegram build, "the icon is broken in KDE" now.
Tbh I'd rather we didn't interfere with 3rd-party apps at all.

Also not opposed to a Kirigami front-end and happy to provide help here. I'm not sure the Go backend is well-suited for the entire KDE infrastructure, though.

Neither is Rust, we're still using it in some applications though, so that should not be a problem i guess? 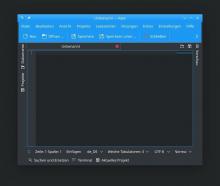 It does look good with the proposed default color palette, but it makes many others, including current Breeze, look like an ugly CSD parody :/
Mar 10 2020, 12:13 PM · Plasma

IlyaBizyaev added a comment to D27466: Increase the size of system tray icon hitboxes on the System Tray Plasmoid.

Well, if dedoimedo likes it this way, then it's probably the right thing to do ;)

It's hard to measure this in pixels, but on the screenshot, it's a 10% increase in size.
I use default font settings btw, with a global scaling factor of 1.25.

It is (already) font-dependent, yes. A higher font size will result in larger spacing.

IMO this is not super sensible, but, there is it. :p

IlyaBizyaev added a comment to D27466: Increase the size of system tray icon hitboxes on the System Tray Plasmoid.

This patch only affects the System Tray widget itself, not anything else on the panel. Only the spacing around the icons that are part of the System Tray applet itself will be changed by this patch.

Repeating my comment on the previous diff for this change: on my machine, the current spacing for systray elements already looks like your "after" screenshot. With normal usage, my systray area (icons + clock + a note widget) takes up 1/4 of the panel. Does it mean that after this change, it's going to be even larger?

IlyaBizyaev added a comment to D27380: [GTK Config] Construct font style by hand instead of relying on Qt function.

The problem being solved here is that starting with 5.18, style names were being localized, which GTK doesn't understand, causing it to fall back to the default font. This patch fixes that.

Prior to 5.18, you had to set the GTK font separately; now it's auto-synced.

Right, so that's the difference in font style names between Qt and GTK that caused the problem?

Were you able to use an italic/bold/etc GTK font in 5.17 or earlier? I must admit I never tried, so if not being able to now is a regression, that's why I never noticed. :(

I am missing context on this bug, but I wonder why there were no issues with font configuration prior to 5.18

I agree with @broulik in that the spacing already feels quite excessive, or at least doesn't need to be increased (:

FWIW there seems to be general consensus among PlaMo developers that the bottom navigation buttons have to go.
At the last sprint, I fixed behavior in Marble that required the "Close" button, so closing apps can be done from the multitasking screen, like on other platforms.
Switching to the home screen is also available from there, and the multitasking screen itself can be opened by a swipe from the bottom panel.

IlyaBizyaev added a comment to D27380: [GTK Config] Construct font style by hand instead of relying on Qt function.

I don't understand the problem in-depth, but isn't it possible to write non-localized style name instead?

I'm not against this, but I wonder if it might make sense to conditionally swap the items only when the "open folders in tabs" is active? Or would that be more confusing?

This... does sound more confusing to me, yes 😅
It's not like the order of these actions makes more sense reversed when that feature is disabled; it's quite unrelated, it's just that it made me use and appreciate Dolphin tabs more :)

Also keep in mind what whenever we change the ordering of menu items, there's always someone who complains, so brace yourself. :)

I hope this will not be the case here, since the person unsatisfied with the change has to not use graphical web browsers, but I'd imagine that such a person would then not use a GUI file manager :)
But I tightened my seatbelts, just in case.

The original icon (on my Android device, at least) looks like a framed pixelated painting, so still holds the "picture" association.

Pix is a gallery application, right? From the proposed icon, one cannot tell that...

Uploaded the CSS revision to aether-sass/!12.