Huh I never saw this.

Are the git conversion rules in kde-ruleset.git?

This is now working for all active backup spaces. I'm not only logging the total space used, but also the size of subdirectories up to depth 2, which lets us do this: 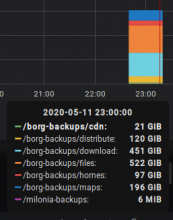 This is now active on nicoda (nephilia) and edulis (storagebox-s3). I started logging when backups run, and looks like I do need to run the storage check at different times on different servers to prevent catching it mid-backup.

I started writing the script and tested it on edulis. No cronjob to run it yet. One possibility is running it at the end of run-backup.sh instead of having its own cronjob, but there's the risk it might run when another server is still doing backups into the same storage, and then we'd get inconsistent numbers.

nalvarez added a comment to T4803: Consolidate {branches/stable,trunk}/l10n-{kde4,kf5}/scripts into a git repository.

I think you should commit this as-is and we can do changes later directly in kde-ruleset.

Welp. Turns out this doesn't work. svn calls ssh with -q which hides the banner.

I realized the SSH host keys will change too, and warning about that too in the banner would become too much. We also need something to link to devs after the server is migrated and they are "locked out" for any of these reasons.

nalvarez added a comment to T11994: Project Moves to Gitlab.

It was one of the last ones to decide to move early, before we mass-migrate everything to GitLab

nalvarez assigned T12917: rolisteam.org is not a valid domain name to commit on git. to renaudg.

(I think it's the first time I get to assign a ticket back to the reporter :D)

Turns out this is a DNS problem. The domain's NS records (in the registrar) point to both OVH and cloudns.net:

nalvarez added a comment to T12917: rolisteam.org is not a valid domain name to commit on git..

Yes, that's not even an email address :)