We need a new text tool. The first step is requirements gathering.

The reason is that certain fonts might have a tiny fault that the user would like to be asjusted, or in the case of line-height, it also can make a text more readable.

I'll need to investigate how this expresses itself, but svg can use css to drive it's appearance. So it's be nice to have...

Stored inside the .kra file, (and a copy in our resources folder) and we allow the user to select it.

This is also related to vector shapes in general, but it may be an idea to remember that SVG allows for text-wide and per set of elements type of transforms, though these are plain matrix transforms, and if we use the transform tool as a UI for this, we'll need to disable all but the basic transforms.

Note about item : "easily translatable using scripts that work on .kra files"
If there is SVG compatibility, it will be possible to add inside the KRA artwork file a 'File Layer' and use a linked SVG file.
Then with command-line swap the target linked SVG with multiple translations and render under different names.

Note about item : "can be baked/rendered from a .kra file"
SVG compatibility + 'File Layer' linked SVG solve this item too.
For rendering, I propose here a feature to "export a target group only from command-line"
Put text layers in a group named MYGROUP, a simple :
Krita input.kra --group-name MYGROUP --export-filename output.png
would render the only the group in 'isolated' mode.
I guess this feature could interest also game-artist, texture-artist, etc ...

The minikin 'library' might be interesting: http://lwn.net/SubscriberLink/662569/b6e362eae472e582/. It should help a lot with layout out text in a pleasing way in balloons. If we can get it to work, the code seems fairly obscure and underdocumented.

A screenshot showing devanagari script being used in krita, as per @woltherav's request. ->

mockup for Japanese vertical text. I used inkscape to generate the base vertical text, then I needed to tweek positions of some chars. (inkscape does not handle vertical Japanese text correctly for now)
I admit I do not make comics myself, so could @tokiedian double check if it looks about right?

My Mockup for the tooloption docker when we use text tool 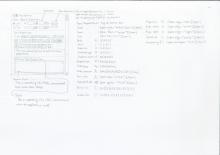 Oh, I forgot to add horizontal-in-vertical to my mockup... 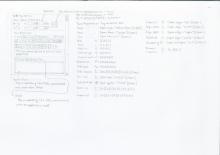 If we're going with svg2, then I think we should also have a source screen that shows the actual xml.

Considering the kickstarter text talks about opentype support I went looking around for some basic info about the current state... Seems people are a bit annoyed about how the UI is handled in most programs. I think we should sit down for a day and make a list of use-cases, otherwise Scott'll go mad trying to solve this insanity.

Just wanted to ask, do we plan to implement "Text on Curve" feature? Or only usual text?

I just documented everything we said publicly to our Kickstarter backers about text improvements we are doing. When we are coming up with functional requirements, it would be good to at least address each of these points to a certain degree

All the requirements together (edited after the sprint):

Results of the discussion during the sprint

GUI for the text tool

I spent a while thinking about organizing everything in the text tool properties. I think if we leave all of these text properties (and vector properties for that matter) in the tool options, it is going to create some problems down the road so it needs to be in a new "object properties" docker. You can read all of my notes and such in the mockup. I am sure I am making some assumptions and errors with this, but hopefully this can start some conversation and get us to the final design.

really good wireframe @scottpetrovic ! It's perfectly in sync with what we discussed at the Kritasprint. Bravo for the cleaning and precise work.

The design looks really nice. I have a few comments/questions though :)

I tried to gather my notes here as structured as possible:

Btw, probably, you could create a Pholio Mockup for the next version of the GUI? The commenting would a bit simpler :)

For anything that has questions here is my attempt to answer...

2 . For your recommendation about being bad to hide/show. What part of hiding/showing is unusable. Parts that aren't used are not shown, while parts that are used are shown. This idea common UI concept called 'progressive disclosure'. I think the most confusing part is that underline has additional options, which most programs don't even offer. we will need to think about this...

4 A. I would think for styles, the markup would contain what the character style is called (eg characterStyle="bigAndBold".
4 B. Editing a style allows you to specify all of the properties that the style contains. It would be a popup.

2nd bullet -- their is an all caps button in the character properties tab of the design.

Good idea about the pholio mockup. I should have moved i there in the fist place.

For anything that has questions here is my attempt to answer...

2 . For your recommendation about being bad to hide/show. What part of hiding/showing is unusable. Parts that aren't used are not shown, while parts that are used are shown. This idea common UI concept called 'progressive disclosure'. I think the most confusing part is that underline has additional options, which most programs don't even offer. we will need to think about this...

I guess I just need to make a video or a gui mockup to should the problem :) I don't oppose the idea of 'progressive disclosure' as it is, just the position of the "progressive" options creates a problem that is visible in dynamics only. I'll try write down the steps, and it fit is still too difficult to understand I'll make a mockup on Monday:

Points 5 and 6 are really blockers.

Only to vector tools. Please check the Object Effects in Inkscape. Its GUI is extremely ugly. I don't know how to make it sane enough. The only sane approach, I'm afraid, would be to implement graph editor like in blender...

4 A. I would think for styles, the markup would contain what the character style is called (eg characterStyle="bigAndBold".

Then the style would just be a set of markup tags :)

4 B. Editing a style allows you to specify all of the properties that the style contains. It would be a popup.

Given that a single style technically can have both property sets, for vector and text, the dialog should use some Tabs/Pages design to not be overloaded.

2nd bullet -- their is an all caps button in the character properties tab of the design.

Ok, that is perfectly fine.

More NB, as far as CSS and SVG are concerned...

SVG has 3 ways of defining text:

Shape is a CSS shape: https://www.w3.org/TR/css-shapes/

Question: How to load/layout preformated? Because this is how all Inkscape docs save/load, and preformated text is literally ALL of the text in @Deevad pepper and carrot svgs.
Edit: https://www.w3.org/TR/SVG2/text.html#TextLayoutPre This seems... dangerous? Maybe we need to talk to the Inkscape people how they envision backwards compatibility with the new 3 types of layout and their old text.
Edit2: It seems the xy attributes of the text can be used... maybe some kind of converter button that attempts to get a polygonal outline for the text involved and pours the de-tspanned text into that???

NB: There's been previous attempts at getting Vertical Text layout into Qt: Abandoned patch from 2014 here It might be that it isn't playing nice with the stripped-down version of Harfbuzz that Qt uses(Harfbuzz-ng), but I cannot be 100% sure about that. Also of interest: Related Qt bug

Although it was written in C, it still has the greatest features for Japanese texts as OSS project.

Did some testing today.

Okay, so I have been adding some stuff, but then had a dicussion with boud about the usability.

Basically, even when doing a minimal amount of styling the text becomes very difficult to read.

Therefore, we came to the following conclusion:

3b. if this is not possible, we'll remove the ability to go to richtext when detecting such strokes.

I've been reworking the current text dialog so it uses (our fork of kxmlgui) and presents a more conventional gui for text editing:

There still isn't a way to convert between the svg markup window and the rich text window, but that's next.

Note: that page has nothing to do with unicode or not being suitable for Japanese, it's all about how Japanese text should layouted. That's indepedent of the encoding used.

@woltherav : We need someone like @timotheegiet or @Deevad design a nice highlighter palette. This is a bit... bright...

Now I can see the current highlight colors thanks to the screenshot of @rempt . On dark theme, I like "Oblivion" colors from https://github.com/mig/gedit-themes/blob/master/oblivion.xml .
But I guess everyone has a prefered highlight color palette. Here is how look Oblivion with 3 color only on SVG:

@rempt, it might be worth it to remove the fore and background color buttons, namely, while foreground color is translated to style="color:#ff00ff;", which should become style="fill:#ff00ff;" or something, backround color doesn't translate to stroke in the same way. So maybe remove background color and instead put in letter-spacing, which does need a slider.

Weirdly(or maybe not), QTextCharFormat does have "textOutline" which could correspond to "stroke", but the problem is that there's no css that QTextEdit will output to convey the color or size of the stroke, and even current css standards don't have such a thing(though there's a near ubiquitous -webkit-text-stroke that all browsers support, go figure). Anyway, unless you feel an uncontrollable urge to fork QTextEdit/QTextDocument to adjust the html saving function, I'd recommend we remove the background button.

We have a similar problem with font-stretch. But users can still type that stuff into the style="" of the svg source.

The branch has been merged. However, there are some notes:

(Note: the svg okay; save the file, unzip, replace the saved svg with the one from the svg source editor, zip, load, and it will be fine.)

I fixed alignment, but fill/color cannot be converted back because KoSvgTextProperties doesn't handle the value, so I have no way of telling whether it is proper.

Except this doesn't work on the first paragraph(which makes sense: it has no dypos value.

I also at the last moment changed em to % for the line height, as I thought that pecentage/100=em... and then I thought I was wrong as the svg text looks different from the richt text... but double checking the css standard, I was actually correct.

I'll leave it as it is as this is less conversion for now, and maybe this kind of unit conversion should be handled differently. Still though, something odd going on with our svg text line height.

Best do balloons and texts on different layers

(Note: the svg okay; save the file, unzip, replace the saved svg with the one from the svg source editor, zip, load, and it will be fine.)

Fill and stroke color are converted back now... but for some reason the QTextEdit won't show them, even though going with the cursor over the text will change the text color widget.
Line-height still doesn't work with my converter due to problems with figuring out how high a line is.

letter-spacing now converts, and so do a lot of other things like baseline-shift, alignment, etc.

There's a weird thing going on with the character offsets, the following SVG loads properly in Firefox and Inkscape, but not in Krita:

And the code for handling the offsets like this is there, it's just not interpreted properly.