This task tracks our design process for the 5.16 lock screen theme redesign.

We are targeting the following changes for now:

There are a very large number of changes, so older changes are hidden. Show Older Changes
rooty added a comment.Edited · Jan 15 2019, 3:58 AM
Comment Actions

hey guys i have a relatively simple question

this is what the mac login screen becomes with many user accounts: 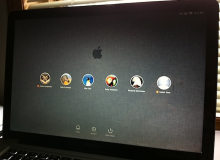 listing all the users that aren't in focus at the moment on the left side of the entire layout might not be a bad idea (thank you windows)?

because whatever layout we choose (boxes/no boxes etc.) we're going to have to deal with user icons, and @filipf and i have been working on a redesign but we need to be told what direction to go in in terms of icons :D

There is also the possibility of getting the current theme to work without blur & fader. Something still rough (and including some other changes) I've been playing around with:

I would be all for that if we can make it look cohesive! Your changes look great Having everything being light or dark definitely improves the cohesiveness. However how would you implement the dark/light theming? For obvious reasons SDDM deosn't have access to user configuration data, so it can't just automatically use the same theme that your user account uses.

I would be all for that if we can make it look cohesive! Your changes look great Having everything being light or dark definitely improves the cohesiveness. However how would you implement the dark/light theming? For obvious reasons SDDM deosn't have access to user configuration data, so it can't just automatically use the same theme that your user account uses.

Yeah, we'd have to add an option to set a color scheme :/

It would also probably mean adding a mechanism that copies user made color schemes into the root directory so SDDM can access it.

It's more work, but IMO in the end a more elegant solution than just making two separate light and dark themes?

Good point. The only problem I'm seeing is that the password and login box cannot be assigned custom colors. The color is determined by the color scheme, which for root is always Breeze, which in turn means the boxes would always be white, even in the dark theme.

We do have our own style though. How do you guys feel about just improving on the current design, because unlike any other OS or desktop environment I've used so far (including Windows that requires an extra swipe, macOS that has its date and time tucked away, gdm that don't seem to entertain the notion of a big clock at all, deepin that tucks it away in its bottom left corner), our current login screen doubles as a lock screen already (because of the clock, and hence there's no need for the wallpaperfader either). Something along the lines of:

Maybe just a dash of blur (like in this picture) to smooth out the potential literal rough patches of a wallpaper a user may choose.

I think a tiny bit of blur would almost be more frustrating than the current amount. It would look like a visual glitch rather than a deliberate effect.

Since seeing Alex's improvements to Kwin's blur effect, I've abandoned the idea of implementing blur because it suffers from the same side effects Kwin used to (or... still does, until the diff's approved). In addition, I've noticed it makes people feel as though they suffer from nearsightedness.

How do you feel about this? No blur whatsoever.
It's basically your old proposal (ditch the blur and add shaded action buttons and user icons) except

I've replaced the label "Different User" with Other for two reasons:

There's an issue however: poor visibility of the users that aren't selected/being logged into.

Other things to put forth for consideration:
I've noticed that certain people simply prefer having a username and password dialog as their default login screen over icon/avatar selection (Corporate setting? Tons of users?). So I think we should consider:

In my mockup, I've also done away with the label "Log in as different user" because to be fair, the label's slightly misleading (Different from what? Also, I can log in as any user so it's not always a different user?)

This still needs a lot of work (as you can see). I'm not sure about the labels but I'd like for this to be a viable alternative (or a viable alternative default). The shadowing stands to be improved, and I haven't yet added shadows or an outline, or anything really to highlight the footer bar (in my case "Keyboard Layout" in the screenshots) which isn't that easy to read on top of a bright background.

P.S. This is what the lock screen would look like with the arrowhead button, font changes, and no border around the user avatar:

Admittedly, the spacing/padding/anchors are still a work in progress :D
filipf added a comment.Edited · Jan 22 2019, 10:57 AM
Comment Actions

Example of the latter:

AFAIK adding shadows to the footer text isn't possible since it's all buttons.

Here's an idea for the inline login button issue: 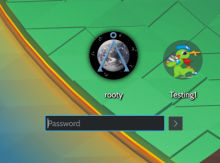 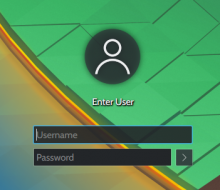 For this representation, I think it might look nicer if the password field itself is centered, and the login button is off on the right side.

Are you sure though? It seems like it kinda sticks out too far beyond/to the right of "Other" 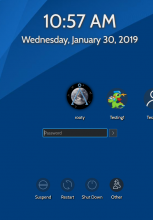 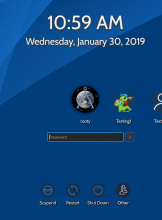 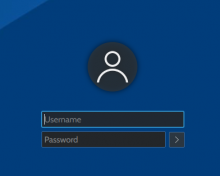 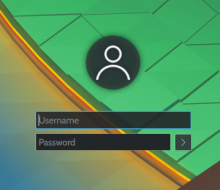 But if I align it or anchor it, it's off by single pixel on top and at the bottom: 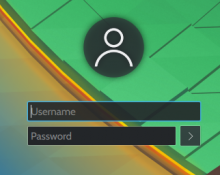 which seems to make matters worse (it looks too big).

There is a dirty solution to this problem:

With this change, it looks pixel perfect no matter the font family or size, but is this an acceptable solution?

You don't; there are multiple views. This is the "choose a user by typing their username" view.

We still have a little bit of polishing left to do.

Fixing the numbers in the clock getting cropped (https://bugs.kde.org/show_bug.cgi?id=404651) is a must. We could port to QQC2, probably implement QtRendering (again) or, what would be the best, fix it in Components.

Another thing I've been thinking off is to somehow have the login button's appearance change after text gets typed in.

Not the login screen, but since we've been touching all of them up: "Oh by the way, and I know I should write a bug report about that, but when switching users, there is this giant PLUS icon above a "new session" label, and under all that a "Start a new session" button. It bugs my significant other that the PLUS icon is non-clickable. :-)" - user opinion

I agree that this could be done better.

That drives me bananas too! It looks so tantalizingly clickable. +1 for replacing it with something that doesn't look like a button. Also, I'd like to make this screen not even appear at all when there's only one existing session; instead just go straight to SDDM: https://bugs.kde.org/show_bug.cgi?id=386361

Oh one more thing - should we push the entire clock + stack a little bit further down to make it more (or entirely) vertically centered?

It's not centered at all at the moment.