Revival is motivated by the fact that we seem to add more and more tools in context menus which not always makes sense (e.g. having lots of hard-coded git tools in the Projects plugin). It makes more sense to e.g. enable launching git-cola as external tool, which was also used for testing: git-cola -r %{CurrentDocument:Path} 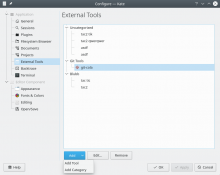 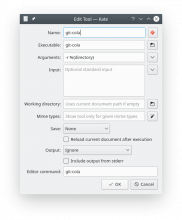 The Output Modes are as follows: 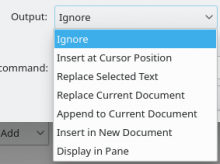 Added small unit test for the KateToolRunner class to make sure running a child process works.

Long not in a working state, so no review required.

The plugin is progressing nicely. In fact, it's almost done and just a matter of polishing. I think it starts to be ready for testing.

These tools are not visible in the UI yet, since the Presets button
is not yet implemented.

Btw, for the presets in the file 'externaltools' I have the following suggestion: Add "Presets >" with submenus to the Add button. The Add button would the contain:

Would that be a good idea? Or would you prefer another button, i.e.: Add | Edit... | Remove <spacer> Presets // here Presets would be a drop down menu listing all the presets. Or better call it Templates?

I play shortly with the thing.

Really important would be the implementation that stderr ends up in a extra pane.

For the pane: I would open one toolview for the external plugin output and have just consecutive runs overwrite the output.
One might want to implement later some kind of "history", e.g. remember the last X execution outputs.
But I wouldn't do one output pane per run.

I played a bit with writing some perl script, but actually nothing happend, even if I include stderr to replace my document.
I assume my command failed.

That would be something for the external tools toolview, too.

Having there tabs, aka one for the output you requested and a second to have some meta info of what was executed. e.g. full command line printed with working dir and stuff.

I tried the plugin, these are my observations:

The following list is my current proposal of variables. These variables already vary from Qt Creator. Not everything else matches anyways:

Any objections or additons to this?

Hmm. My idea came from this siutation: 1) have an XML document open, 2) cursor somewhere near the top, 3) Run Format document. => View is scrolled down to the bottom. More comfortable would feel if the view would stay somewhere around the original position (must not be exact). Especially when formatting almost correctly formatted documents the document does not change that much. In any case: a nice-to-have feature.

I'm looking forward to having 100 tools :-). One thing came to my mind: what if we had externalstools.default and externaltools.extra? The tools defined in the first file are added by default. The second file contains those tools that must be added via "Templates". Personal note on the name "template": for a ready-made tool that can just be used as it is (which hopefully most of the tools are), the term "template" does not fit so good.

via the plugin, instead of

I thought about a general purpose solution: What about adding a new variable "ExternalTools:ScriptsPath" which points to a (new) directory "scripts" which is located in parallel to the externaltools file? In this directory scripts can be added that fulfill more special yet useful tasks, like the mentioned git tasks. I can also imagine more complex scripts that extract useful information out of the git repo and show it as HTML file (e.g. author statistics, extended blame or log info etc.) or help to extract a subfolder as a new git repository preserving its history.

By the way: idea for later for another Output type: "Show as popup" or "Display as inline note". This could be used for tools with little output like "Git Blame / Who touched this line last?" which runs only on the currently selected line.

The following list is my current proposal of variables. These variables already vary from Qt Creator. Not everything else matches anyways:
...
Any objections or additons to this?

Actually, I meant both, KTextEditor::Message for "Show as popup" and InlineNoteInterface for the other one. For first one, there are some use cases; the second one could be used to display git blame information more persistently than with a disappearing note. Both nice to have, of course.

About the variables:
there might be the wish to do some action (formatting, annotating) on the current view, therefore the suggestion:

Maybe also because we have RowCount, but I have no use case yet:

Here the link to the mentioned asyle stuff
https://community.kde.org/Policies/Kdelibs_Coding_Style#Artistic_Style_.28astyle.29_automatic_code_formatting
But there is still "--align-pointer=name" missing

It's not closed, it just lives in the kate/revive-externaltools-plugin branch.