In some languages the sidebar container header is wider than the
minimum container width and therefore cut off. By using a squeezable
label and setting a proper default width, the header is displayed fully
when Okular is started for the first time, while still being able to
reduce the size via the splitter.

By removing the explicitly set minimum width, the QVBoxLayout is
now allowed to actually do its job of automatically calculating the
proper minimum width based on its contained widgets.

In times of ultrawide 21:9 displays, setting the maximum width to 600px
seems arbitrary and overly restrictive, so it is removed.

Both width restrictions were originally chosen in 078b81b7 with no
explanation given for the values selected, which later were changed to
different values multiple times. Today, they simply do not seem
necessary anymore.

Note: The first-start size for some languages is now wider than before,
still acceptable though (see screenshots of Greek, where the translated
string of "Thumbnails" is one of the longest among all languages).
Most languages are not affected at all and users could easily move the
splitter further to the left.

Note: KF5_REQUIRED_VERSION is not bumped for now to require the fix to
KSqueezedTextLabel (see depending review), as this minor visual tweak
should not prevent building of Okular on older distros. For those, at
least cutoff will be reduced to 9px, distros with updated KF5 would get
the full cutoff reduction to 0px.

Use default fonts, change application language to Greek. Remove
Okular's config file before restarting. Notice how sidebar header is
not cut of anymore. Move splitter left (text in header should elide) and
right (does not stop at 600px). Window resizing works as expected.

I would very much prefer if you would use QGuiApplication::devicePixelRatio instead of removing the lines.

Thanks for looking at my patch, but I'm not sure I'm understanding you completely here (you didn't state a reason for your preference). How would this fix the header text being cut off and the (seemingly) arbitrary max width restriction? Hardcoding any fixed widths (even with HiDPI scaling in mind) seems wrong.

Removing the lines, the sidebar adapts its width to the header text. In practice, apart from eliminating visual glitches, only little will change, e.g. for English, both default and minimum sidebar widths are nearly identical (if not a little smaller).

My preference is, you actually fix the code instead of removing it.

Albert, I don't see how fixing the code would look like, either. Even if the max width would be given in some dpi-independent way, there would still be a size limit and translations of "Thumbnails" would be cut off. Are you proposing to use an dpi-independent size unit AND increasing the max size?

Albert, I don't see how fixing the code would look like, either. Even if the max width would be given in some dpi-independent way, there would still be a size limit and translations of "Thumbnails" would be cut off. Are you proposing to use an dpi-independent size unit AND increasing the max size?

I guess this discussion is more about behaviour than about
implementation. Should we artificially restrict min and max widths? IMHO
no, and the HIG doesn't talk about it either.

As for the potential change in min width (see screenshots above for most
extreme case): We could use elided text and set a non-eliding default
width. I'm working on this compromise, as indicated by the status
"Changes Planned". However, this will probably need a bugfix in KF5 first.

Should we artificially restrict min and max widths? IMHO no,

You have an opinion, I have another.

the HIG doesn't talk about it either.

the HIG is not exhaustive at all, lots of programs don't do things that the HIG doesn't talk about.

Suprisingly, this is not needed at all. The scaling is already working in HiDPI mode, still restricted to 600px*scalefactor though. I'll modify my argument to concern ultrawide screens so it still stands, along with the cutting-off problem.

Should we artificially restrict min and max widths?

I'm genuinely interested in your reasoning for keeping min and max width restrictions. Maybe I have missed an important aspect in my arguments against them? I'd be glad if you can point it out, so I could learn something and improve my patch.

use elided text and set a non-eliding default

Can you explain why you would let people resize the sidebar to stupidly unusable sizes?

I find it really hard to translate this kind of comment into actionable feedback I can improve upon, because this neither details an actual problem, nor does it suggest an alternative size.

Instead, let me expand on the properties of my proposed solution, so we can determine any flaws:

For the minimum size:

For the maximum size:

If there are any other comments regarding my patch, please share.

Honestly i don't see a reason why http://i.imgur.com/K2ap7CD.png is a layout we should let the user set, but as said, it's just my "opinion".

Find someone else to commit this for you :)

Thanks for the screenshot, now I know you are talking about the max width of the thumbnail sidebar for vertical documents. I guess you are fine with removing the min width.

As said above, I think users are perfectly capable to decide for themselves which width they like. Indeed, the grid approach would be better, but is out of scope for this patch. We should not focus only on the thumbnails here, but also look at e.g. the TOC.

Lastly, it is the nature of interfaces with flexible layout to not perform optimally in every situation, i.e. display resolution, aspect ratio and type of document. A static max width does not work, it should (if at all) depend on the context.

I will now try to find other reviewers. If they find the single edge case pictured above to be more important than the general case (e.g. non-thumbnail sidebar, different document aspect ratios, users acting rationally) we could try to limit the sidebar width to half the window size.

@pino: arc cover and git blame printed your name. If you find the time, I'd be happy if you could take a look at my patch.

@sander: Do you happen to know other reviewers who have an interest in Okular?

I agree with Henrik again. Yes, the very wide thumbnails in Albert's screenshot are strange, but I don't see why we should actively prohibit them. Besides, even with a vanilla Okular I am able to make the thumbnails about twice as wide as the actual pages (screenshot on request). So Henrik's patch does not make things (much) worse in that regard.

Thanks Oliver. I'll respect the rules and wait for formal acceptance before committing, though.

@pino Friendly ping :)
Please let me know if you have any questions or someone else should review this.

I just tried the patch. On my German setting, the labels are usually also cut off to the left and to the right. Strangely, the patch doesn't really change that.

I just tried the patch. On my German setting, the labels are usually also cut off to the left and to the right. Strangely, the patch doesn't really change that.

I think you mixed something up :)

Your screenshot shows a bug with the sidebar entries (multiple), which is something I propose to fix in D6695 (please comment there with scaling, font, font size and subpixel hinting settings if D6695 still does not work for you). However, here we are looking at the (single) bold sidebar header (right below "Bearbeiten").

Ah, now I see it. Yes, the patch seems to work: the sidebar header is now elided rather than simply cut off, and I can make the sidebar as large or as small as I desire.

Albert, I consider committing this, unless you really object. What do you say?

*raises hand* I care about Okular!

I actually have to agree with Albert here, and I have what I believe to be a good reason for not allowing the thumbnail bar to be wider than the main view.

In the screenshot Albert provided, it wasn't clear to me that the thumbnail bar was hugely wide. I actually thought that he had somehow moved the thumbnail bar to the right side and what was in the middle was the main content view.

Any novice user who accidentally resizes the thumbnail bar in such a manner would be similarly confused by the different interaction patterns, and it would probably never occur to them to try resizing it to resolve the issue. I can imagine my mother doing this--she actually does this sort of thing all the time, and it always results in a phone call to me.

I do like the idea of eliding the header text at small widths, though. That seems like a good change.

Thanks Nate, you make a rational point (even if I do not agree fully). As promised above:

I will now try to find other reviewers. If they find the single edge case pictured above to be more important than the general case (e.g. non-thumbnail sidebar, different document aspect ratios, users acting rationally) we could try to limit the sidebar width to half the window size.

…which I will now add to my queue of things to try to implement (won't be trivial, as the window size can change at runtime).

FWIW, Apple's Preview does something similar and limits the size of the sidebar to about 40% of the window's width. They elide the text, too. 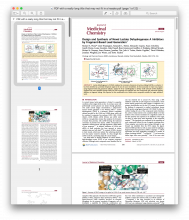 FWIW, I don't think eliding the text is controversial at all; could we maybe break that out into a new patch so we can get that merged quickly?