Comparing Spectacle with other screenshot tools, we can notice that we lack the function of tasks that are done after a screenshot has been made.
Other tools have, for example, the ability to automatically upload it to an imagehost, ftp server, etc.

I've made this small draft, with the intention to add much more tasks the user could do.
This one, in the screenshot below, allows the user to call any program/bash/python script after the image has been saved.
With this simple addition, an advanced user can easily make an own script/program that, for example, uploads the picture somewhere. The default argument would be the location of the image. So an user can easily grab it in a *.sh via $1.
Adding more built-in tasks should be appreciated more by users who are not familiar with making scripts. 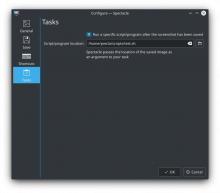 Currently we have the Export function that enables us to either send the screenshot via mail or upload to online services. But this has to be called manually.
Tasks would enable to automatically upload a screenshot to a desired host, or send it via mail, etc.

That is pretty darn cool. A great power user feature.

I can already see myself doing fancy stuff with this and kdialog :)

Just gonna leave this here, so I don't forget about it :D

Got me into thinking:
The user sets a Shortcut and connects it to a Task.
What if, this would require quite a lot to do, we make an Task creator panel. Where a User can create his own Task and give it a name. Then, in the Schortcut settings, the user chooses which Task gets called for a specific Shortcut.
Creating a Task could include all of Spectacles functionality: After screenshot has been taken, save/edit/clipboard/... it, upload it, close Spectacle, etc.
Whereas the User sets the desired actions for a task with Checkboxes and Radiobuttons, and can have multiple tasks.
Similar to Message Filters in Thunderbird. I hope i described it well enough.