The config key has been moved to a separate file, some foreach have been refactored, the QRegExp occurrences have been ported to QRegularExpression and are now reused.
Furthermore unnecessary functions/function calls have been removed and the code is formatted.

WIP: Currently the way the matches look is not very good, because there is far too much text displayed for example: 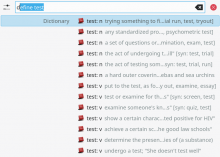 And with a crappy kwin rule which increases the width:

My Idea would be to make the definition, example sentence and synonyms customizable.
By default the word type, definition and synonyms would be shown for example:
n trying something to find out about it [syn: trial, trial run, test, tryout]
And also an action which shows a dialog with all the available information and maybe some copy buttons for the synonyms.

Because this patch is refactoring/cleanup I consider making a new patch for these feature and would appreciate feedback for the ideas :-).

Should work as before

About fixing the UX:
There is some kind of preview tech in milou which you can take a look at and maybe build upon.
The line space is just never going to be enough for a text only representation of a dict entry, plus it looks fairly forced anyway. So, my thinking is that ideally we'll want a minimal text display but then be able to expand that with a rich "preview" of the dict entry for the clients where we need that (notably krunner I suppose). Rich in this case means having full on control over how it is displayed using a bespoke QML item. This could work a lot like clipboard entries do, where each entry can have multiple mimetypes, one of them ought to be text which is kind of the go-to fallback, but they others may give a richer experience when the client supports it. Matches could behave much the same way, and from a glance at the existing milou code that is kind of where things were headed.