Fixed HFR calculation in the FITSData class, which was accumulating integer instead of double values.
This led to incorrect consolidation of HFR over multiple stars in the focus procedure and incoherent results in full-frame mode.

In order to debug, added HFR values directly in the FITS view, next to circular star marks.
The HFR values are now displayed only for the focus module, they do not appear in the regular FITS viewer.

Took the opportunity to adjust the Focus module UI, so that buttons are bigger and a few UI hiccups are resolved.

On another subject, the CCD Simulator seems to produce the same SNR even as the optical simulation approaches the optimal focus point.
This causes rendered stars to be smaller, and thus to be missed by the FITS detector. In other words, the more focused the frame is, the less stars are detected.
Because of this problem, the focus procedure sometimes fails with the CCD Simulator.

Awesome addition to the module and thank you for catching the accumulator issue.

Procedure tested this night, works smoothly again. I'm fixing the UI dimensions, but I'm not sure it currently fits in 800x600 with the icon tab and the bottom log?

Yes the size is actually less than 800 pixels with the simulators running. 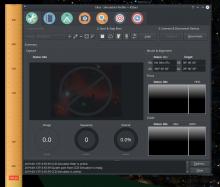 I'll share a screenshot in my environment too. In any case, I stand my point about layout constraints, I will make sure the minimal size fits the required dimensions. What is that tool you used on the left?

It's kruler. Anyway, please submit your changes and I'll test the UI again.

I quickly checked on an old version on my lubuntu, Ekos is roughly 835x750 when minimal, because of Capture I think. Thanks for these insights.
By the way, wasn't the relative profile curve on a tab in the past?

Rendered HFR only if it can be fully displayed (fixes clipped text).
Used an autovar in the enumeration of star centers.

Focus UI is now smaller than 800x600 when I restrict the manager to that size. I'll tackle the rest of the modules in another diff. 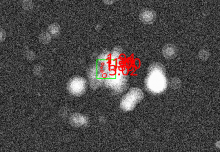 I've tested it with simulators and everything looks good. Having the HFR-values displayed makes it much more transparent what the focusing algorithm does.

Maybe one thing maybe needs some polishing. The idea with the tabs for Settings and Advanced are a good idea. I personally would place more parameters into the Settings tab and less under "Advanced". I personally would opt having at least box size and step size under "Settings", maybe tolerance as well.

But this fine tuning. I would publish this diff and issue the fine tuning later.

That would make "Settings" and "Parameters". Maybe I should replace "Settings" with "Basic" if I move some stuff in from "Advanced"?
I'll try to move stuff around. I would expect for instance SEP parameters to get a new tab.

I see. However your frame is a bit edge-case to me, it has the algorithm incorrectly detect many stars garbled in the same place.
I see how I could do, but I'm not sure I want to extend the fits viewer right now with a list of quads containing HFRs that should be sorted, translated and eventually filtered, then rendered...
My night test looks like this, but this is not a cluster, agreed. 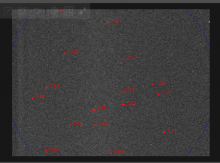 Awesome job, Eric!
I've tested it with simulators and everything looks good. Having the HFR-values displayed makes it much more transparent what the focusing algorithm does.

Thanks. Along with the area filter, it's really more stable than the single-star focus procedure in my opinion (with my setup in fact).

Maybe one thing maybe needs some polishing. The idea with the tabs for Settings and Advanced are a good idea. I personally would place more parameters into the Settings tab and less under "Advanced". I personally would opt having at least box size and step size under "Settings", maybe tolerance as well.

I can fit only two more lines with three columns for the first tab. I'll see what I can do.

Should there be some simple label collision-detection to make sure they don't overlap?

The labels are simple drawText calls. There could be a first loop consolidating a list of rectangles bounding labels, then a second pushing labels away from each other but keeping them close to their star marker. But the added value is not high enough for me to implement this now. It'd more important to be able to tweak SEP parameters to detect stars more efficiently I think.

Ok, I guess this could go into a future PR.