Now, after the keyword "class", Heredoc's will not be highlighted [1]. For example: 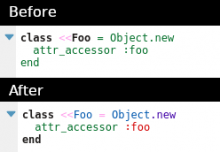 Before, <<Foo was highlighted as Heredoc.

For example, HEREDOC was previously highlighted as: <<"HEREDOC , <<HEREDOC"

I also added a modeline to force the use of tabs as an indentation, since the file uses tabs.

I am no Ruby expert, but your screenshots show a clear improvement, please push ;=)
Thanks for the improvement + tests!