Summary:
In the specific case of having the device notifier opened
and inserting a device that has been configured to be
automatically mounted, the transition animation could be
interrupted resulting in the opacity being wrong.

Test Plan:
In the setup discribed in the summary, you should never
see something like the attached screenshot where the list
of action opacity is not 1. 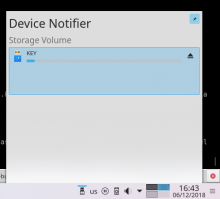