Summary:
The Dim Inactive effect was rewritten mostly to fix most of issues with
it, e.g. after leaving a full screen effect(e.g. Desktop Grid) windows
sometimes are not dimmed back, or when a window becomes inactive there
is no smooth transition, etc.

Before: the window is not smoothly dimmed.

After: the window is smoothly dimmed.

Among other changes, the KCM has been re-designed to follow common KCM
design in Plasma: 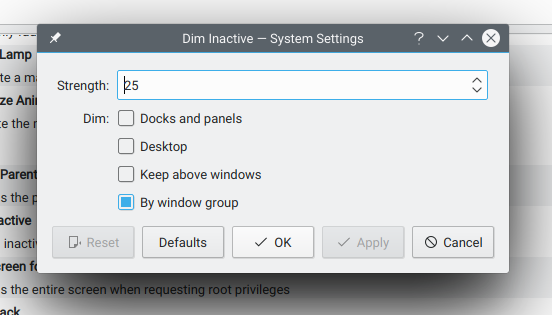 The way the rewritten Dim Inactive effect handles flashing/flickering problem can be
reused in the Dialog Parent effect.

Before: dimming of a window group.

After: Dimming of a window group.