I'm a furry, a translator of academic articles, and a germanistics graduate who is interested in linguistics, translation, social psychology, ergonomics, games and linux. Also known by the fursona/alias Blumen Herzenschein.

I'll start working on the lengthy descriptions in a few days.

Okay, I think aside from Windows and OSX, we already have most major DEs and keyboard-driven environments here, and it's been a while since we had input from other people. Part 1 of section Tasks to be done in order to achieve this is already quite significant. I'll continue working on that, but that does not hinder discussion here, to be clear.

Hey guys, i tried to make a poster.
does it work for you ? 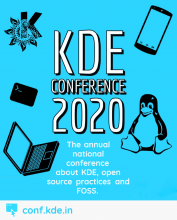 Assigned myself to this specific task since I'll keep track of activity to put on the table.

Added T12423 as a subtask, it serves for organization. If you're interested in a specific project or want to work on a project but still don't have your name assigned there, you may add yourself easily to the table by editing the task.

thiagosueto added a comment to D24281: Add default shortcut to switch to the desktop to the left/right/top/bottom.

I am sorry for the strain that puts onto OP but we have at the moment a tendency in KWin (and in my opinion overall Plasma) to go for the least exceptional solution and instead just aim for already elsewhere established, crowd-pleasing, convenient ones.

thiagosueto added a comment to D24281: Add default shortcut to switch to the desktop to the left/right/top/bottom.

Sorry for being late to respond.
My two main concerns are whether the modifier keys are suitable *and* that we stay consistent on them.
What we have seen so far:

In general, apps don't use the Meta key for their shortcuts, while the shell does.

I verified that the first part of this is not true. Other DEs and distro implementations such as Xubuntu use the rule Meta+(first letter of application functionality).

Also I don't like overloading the arrow keys with functionality such that you need to remember unrelated modifier keys for when does it what.

This seems to be unavoidable from what I've seen. So far, GNOME, XFCE and MATE did not manage to make things consistent in this regard, each appealing to some complex alternative just so as to compensate the lack of keys available for the huge amount of functionality. GNOME includes an alternative to Meta+arrows by using Ctrl+Alt+PgUp/Down, XFCE tried to do the opposite of Plasma, using Ctrl+Alt+arrows/PgUp-PgDown for system shortcuts and Meta for applications in addition to an extensive use of F# keys, MATE by using Ctrl+Alt to the max and simply not assigning other keyboard shortcuts, and Cinnamon simply sacrificed as much keyboard shortcuts as possible.
The main issue I see here is that we will likely end up having a four-key keycombo eventually, which I disapprove of but is not the end of the world.

This may be partially avoidable with the progressive increase in the number of keys. Assuming we have Meta+Ctrl for switching between workspaces and Meta+Ctrl+Shift for moving a window between workspaces, it would be more difficult (although marginally due to the proximity between Ctrl and Shift) for the user to press Meta+Ctrl+Shift than it is to press Meta+Ctrl. Generally speaking, the reason people use two-key keycombos is so that people don't accidentally activate functionality with a single touch. Three-key keycombos are inherently harder to press accidentally than only two keys. In this case, while the distance between Ctrl and Shift is problematic, the distance between Ctrl and Meta are not.

The shortcuts here need both hands. A workflow with quick switching of windows between different VDs is not possible.
for these I expect them to be usable via one hand and with the opposite hand of the mouse hand (normally this means they are accessed with the left hand)

Using two hands is desirable if we consider RSI, it reduces strain by letting both hands share the workload.

Okay, since default shortcut to switch to VD was already chosen, we only need to figure out the rest of the navigation shortcuts.
It was taking a while because we had to decide which modifier goes with Meta, but if one of the set has already been decided, the rest goes along quickly.
So for navigation we just need "Move Window between Screens" and "Move Window to VD". I find the first to be absolutely needed here.

For starters, we could elaborate on each specific point shown in the manifesto. Especially these ones:

Added some placeholders so it should be easier to add new projects to the table.

thiagosueto added a comment to T11915: Commission new official version of the KDE logo with the word "KDE" next to it or below it.

Kabel is +1 from me
filipf's design too
Unless the other fonts could have less spacing and be bigger.
The KDE name shouldn't be too thin, it should be visible from afar and also for people with impaired vision.

thiagosueto added a comment to T12222: Figure out manufacturers to contact on using Plasma as an available default.

Please coordinate this with the board.

Ah, my bad. I mistook the acronyms and remembered them incorrectly.
For some reason I remembered CVS was content versioning system, but what I was thinking about was actually VCS, version control system.
CVS is one of many different VCS. Will remove my suggestion accordingly.

I will think of some proper descriptions later.
That said, I have three questions:

@Zren could maybe profit from having some of his projects hosted on KDE as well?
Event Calendar for instance has Google Calendar integration and if I recall correctly it is also integrated with KDE PIM.
We already have some widgets hosted like Eike's Simplemenu and Psifidotos' Latte Dock, for instance.

Am I correct in assuming that subtasks must be resolved as steps before the main task can be resolved?