User does not belong to any projects.

baberts added a comment to T10530: Redesign Scene for subsurfaces.

This is definitely an important mechanic preventing people from using Plasma Wayland. Firefox Wayland just does not work, and goes absolutely nuts at least partly because of this.

baberts added a comment to D14949: Add option for whether to show the volume change OSD.

Additional there could be a radiobutton

How about "Display compact version in full screen apps". And then make this behavior the default. The problem people have with the big version seems to be when it covers stuff up in movies, that are played normally in full screen.

EDIT: Ok, I just noticed that I suggested this already some months ago. I don't want to repeat the same ideas so ignore it if you want to.

Everything that's left here could easily fit into a popup on that KCM, or we could use the multi-page KCM system to put all of this stuff on a sub-page on that KCM.

By the way, I've already made a popup in Applications Style KCM. Personally I have no objections whatsoever on that style and would gladly use it. 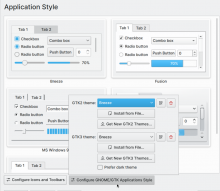 Nevertheless, this patch is still needed. For the most part the logic and approaches in this code, that I wrote here, will be almost identical to the ones in the future Application KCM code. So I would like to hear comments on how it is good\bad or could be improved, before I make changes in different repository. If I had made changes in two repositories at the same time, it would have been a bit harder to maintain the changes, after revisions.

I was just made aware of your work here by the developer of kwin-lowlatency, and i gotta say, I'm quite in love with the idea! Kwin really needs some love! Good luck!