User does not belong to any projects.

We may want to change KRun::runUrl when a native binary is to be run but with runExecutable is false, around line 400:

Well there was already KRun::setRunExecutables :)

I thought about using KRun::setShowScriptExecutionPrompt() for D10835, but "Recent Documents" include only those files which were opened, and doesn't include ones which were executed, so an execution prompt there would be totally unexpected by a user. KRun currently doesn't seem to have a way to force opening of executables - one can only prohibit running them with setRunExecutables(), in which case an error message is displayed. That's why I decided to go the way it is now.

There's a problem with the git setup on the computer you used to make this commit; the name field appears to be empty, so I get an error when I try to apply the patch

path1 *should* never be empty

Here is an example of KUrlCompletion breakage.
Before, it returned invalid absolute paths like /Desktop etc.: 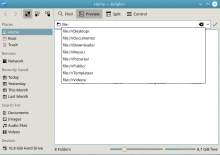 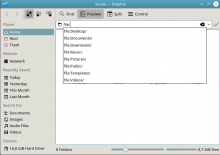 Am I expected to cherry-pick this commit to the Applications/18.04 branch after pushing it to master?

Would it also be possible to call setRestartHint() directly, or why is the connect required?

aleksejshilin added a comment to D11331: add gaming_input devices and others to Battery.

typically we'd do cfg = cfg.group("") which IMHO is easier to read

One could argue keeping the colour persist across wallpapers is a feature, what problems does it cause?

I think there's a bug report about this somewhere if you want to find it.

So why you called hack, why no just add conditional compilation against 5.44

If there are no more concerns, could anyone actually accept the revision, please? :) Thanks in advance!

Do you have a contributor account to commit this or should we do it on your behalf?

So why not do the same here instead of offering "Open With"?

Can you check whether this affects Task manager also?

Instead of the bool member, isn't it enough to test the distance again in mouseReleaseEvent? AFAIK that's how most widget do it. It also leads to one difference of behaviour in case someone moves the mouse a bit and then back to the original position, in that case the mouseReleaseEvent considers that no move happened (not sure if that's what you want here).

aleksejshilin added a comment to D10478: messagelist: Save current selection at exit.

Do you want that I commit it for you ?

Thanks!
Please note that I don't have a Developer Account and hence am unable to push the changes myself.

Hi again. :)
Any news on this? Is there anything I should improve?

So, any comments on the updated revision?

aleksejshilin added a comment to D8502: Fix brightness not restoring when an inhibition is active.

I bet there's a bug report on Bugzilla about this.