Tags
Subscribers
apol, GB_2, • lavender, markuss
Assigned To
None
Authored By
markuss, May 19 2019

Simply speaking: EmojiOne is dead. They removed the CC-licensing option from SVGs with version 3 and later did the same even for lower-res bitmaps.

The current release (renamed JoyPixels) has a strict non-commercial rule even for lower-res bitmaps, rendering the entire project incompatible with free software: https://d1j8pt39hxlh3d.cloudfront.net/contracts/finalized-pdfs/free-5.0.pdf

Twitter is maintaining a fully free emoji set that has a similar design as EmojiOne: https://twemoji.twitter.com/
The designs are under CC-BY 4.0. They are quick to release new versions with each Unicode Emoji version bump every summer.

We could use this one: https://github.com/eosrei/twemoji-color-font

While full SVG-in-OpenType compatibility by Qt and bundling twemoji-color-font with Plasma is indeed the desired outcome for me as well, it's out of the scope for this task. This is simply about the substitution rules and the bundled graphics.

I'm not sure what you're talking about. Drop EmojiOne from where?

The emoji you use comes from whatever font you are using and how your fontconfig is configured. We could discuss how we make sure we offer a great default but at the moment Plasma isn't suggesting any fontconfig configuration. 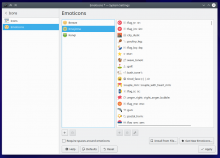