Therefore, I think it's a good idea to support all implementations: code blocks can be written with 3 backticks or more, or with 3 tildes or more . Other editors, such as Visutal Studio Code, Atom and Sublime Text highlight fenced code blocks in this way.
Unfortunately, this is only possible using dynamic rules with several RegExpr, which isn't very optimal. I have no problem modifying that if you don't like it.

Improve highlighting of links and references

Through dynamic rules, the indentation of lists is captured, in order to correctly highlight the indented content in them.
Now the text within the lists is highlighted using "dsNormal", so as not to saturate Markdown documents with many colors. 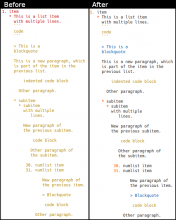 IncludeRules is used to highlight only HTML tags. [8]