After some work on the task T12729, it is almost feature-par with the previous module, and adapted to the recent move to KConfigXT. I'm uploading it now as a patch, so it is easier to be reviewed by more eyes. 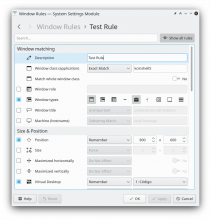 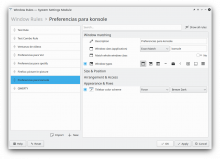 First of all, thanks @broulik for such a thorough review and feedback!

About some of your many UI comments, I've already implemented some, while I'm torn on some others, but will leave it to you VDG people decide.

AFAIK, the order affects when a window can be affected by a more general and a more specific rule, but I also don't know the details

I had had doubts about the edit button vs clicking, but agree:

Here I feel that the non-flat buttons can give a more "busy" feeling when close to the KCM buttons, while flat ones make it more clean, but I'm not strong against it: 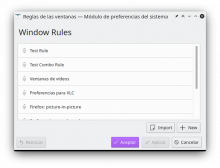 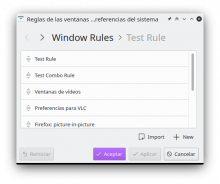 I know. In this case I think a checkbox is out of the question visually and semantically, so an alternative can be the yes/no radio buttons like in the old KCM. I still slightly prefer the switch, but the radios doesn't look that bad either.

(Sorry I only came halfway through with code review now)

No rush, lucky me, since now there is no place where I can run and hide 😄

Now the rules description can be edited inline in the main list view, but I find it a bit quirky due to how TextField behaves, and I might need some hints on that

Make sure you remember to remove "WIP" from the phab request when you think we're ready for merging, otherwise no-one will do any approving.