Add support for sub-comments to the Reviews backend
ClosedPublic
Actions

Using a similar style to the comments delegate in KNewStuffQuick, this
adds the functionality for having subcomments in the Reviews model.
The end result is that we no longer have incorrect numbers showing in
Discover, as it now shows all the items returned by the server. 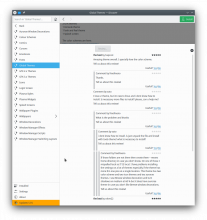