As discussed with the VDG, the color KCM had to be split in a very simple KCM to choose a color scheme, and a color scheme editor.

Here are the current issues:

To test directly, you can use the branch andreas/kcm_update 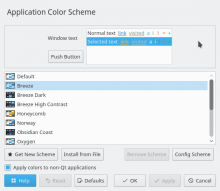 can you post some screenshots cause I can't compile it.

can you post some screenshots cause I can't compile it.

The KCM looks okay for a first iteration, although for the future, it would make more sense to design it like the Look And Feel or Desktop Theme KCMs, with a grid of bigger previews instead of list + one big preview.
What I'd change right now is Config Scheme -> Edit Scheme

For the editor app: The biggest problem is that it still looks and feels like a KCM or a config dialog, not like a proper application. That is okay for the first iteration, but in the future, it should be turned into a proper application layout (with a classical top toolbar, more spacing etc).

I would like it in plasma-sdk. even keeping it there for a while is fine, it's just important that it's shipped when the new kcm is in, to not have a release with feature loss

I like it. Nice work. I agree I would change Config Scheme to Edit Scheme.

I like it. Nice work. I agree I would change Config Scheme to Edit Scheme.

The executable is now KColorSchemeEditor.

If someone could tell me what the kcolorschemeditor.desktop should be as well? Then I'll update the review.

Ready to ship, I just wait for your remarks.

This has been submitted, I will just abandon changes..