The dusk and dawn offsets can be modified from the Ekos Scheduler options, and the night time interval displayed in the Scheduler UI will be updated when applying the changes in that dialog.

great idea indeed. I look forward to using it

We need applyConfig to trigger updates in modules following a change of settings. For instance, altering lead time in the options requires a re-evaluation of the schedule. Granted, there are not so many cases for now because most procedures use options when they execute, without preview. Scheduler prepares execution and present it to the end-user for verification as a job list. Thus while the evaluation would be done again when starting the observation, and options taken into account at that moment, scheduler needs to update its presentation when options are applied to retain coherence.

Regarding the 800 pixels, it actually affects it and by default now we end up with more width that cannot be reduced.

For the applyConfig, maybe use this in scheduler?

Ah you mean there is a missing restriction in the manager? I'll double check ok. Thanks for the connection example, I'll try to use that!

Manager dimensions restricted to 796x568, to leave room for window manager decoration and remain under 800x600.
Rehauled the Scheduler UI completely, removed ALL size specificities, and had the layout manager do its job on its own for the entire UI.
Qt layouts are nice, but one need to trust logic and hierarchy, not Qt Designer views.

Also slightly changed the Option dialog creation so that the dialog is effectively prepared before modules connect signals to it.

Dawn and dusk offsets tested over two nights, work as expected (this change is actually far simpler than the UI stuff...).

Oh, and I removed years from dates to compact the view even more. 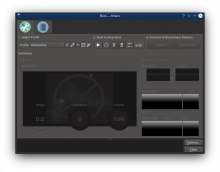 I didn't touch the manager, except for adding the dimension you mentioned and that was not there in the first place. As you can see, the manager is unable to achieve 800x600 without overlapping gadgets as it is now. I made sure Scheduler was not preventing the dimension from being reduced to the required size. The manager issue must be tackled by another diff.

By the way, the overlap is quite neat I think. But I agree there is much space wasted on this page.

Oh no. You mean I've been tweaking the UI to death just because I thought you meant 800x600 and not 800x800? That's embarrassing for the hairs I've been pulling out for that diff...
Could you simply tweak as an additional differential the minimum size block at the very beginning of manager.ui to relax my restriction to 768 instead of 568?