Use the new drag handle in the Language KCM
ClosedPublic
Actions

To do this, the backend model was split up into three models so
the move() method could actually move a row as the new drag handle
expects. This also makes move and remove actions a little bit
faster since there's no proxy abstractions involved. The use of
Plasma.SortFilterModel with JS callbacks for filtering has been
dropped from the QML code.

The lists now use DelegateRecycler to be speedier.

The list of available languages is now guaranteed to be sorted in
a locale-aware manner and case-insensitively, using QCollator.
This likely works better than whatever PSFM was doing with the
Qt::DisplayRole sort role before.

Mention the use of DelegateRecycler in the message.

This is now ready for review.

With the use of DelegateRecycler, I get many ReferenceErrors from particular the sheet list delegate during scroll:

I suspect this is some sort of race condition. @mart needs to have a look. The code in the diff itself should be unrelated to this I hope. 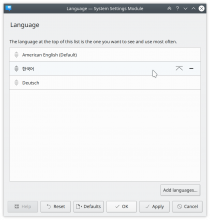 Uncheck sheet list items when the sheet is closed.

This now has to be done explicitly as the delegates no longer get
destroyed with the use of a DelegateRecycler.

Drop height and anchors as per Marco's advice.

The other two are currently still needed: